There are a lot of different websites in Canada that are advocating for universal child care. Some people have told me they get confused by these sites because they are not always clear exactly “who” is behind them. Even more, they often wonder who paid for them to be developed.

So . . . I decided to do a little research to see what I might find out. It set me off on a bit of an adventure. Read on to see what I discovered:

Child Care for All  & Time for Child Care

According to a 2017 press release, the Canadian Child Care Advocacy Association of Canada (CCAAC) rebranded as Child Care Now.

OTTAWA – As of November 20, 2017, Child Care Advocacy Association of Canada (CCAAC) will be known as:
Child Care Now
Tag line: time for child care for all
Un Enfant Une Place
Tag line: des services de garde éducatifs pour tous
“Our updated names and tag lines reflect the need for Child Care Now’s new website, www.timeforchildcare.ca, will also launch the week of November 20, alongside our campaign website, www.childcareforall.ca.The rebranding coincides with National Child Day, which commemorates the adoption of the United Nations Declaration on the Rights of the Child in 1959 and the UN adoption of the Convention on the Rights of the Child (CRC) in 1989. The latter provides specific rights to Canadian children and child care, many of which have yet to be fully realized, including the rights of children of working parents to benefit from child care services (Article 18), the right to child care services for children with disabilities, disorders, and/or health impairments (Article 23), and the requirement for Canada to establish standards that ensure child care staff will be suitable and will provide competent supervision (Article 3).CCAAC has been Canada’s umbrella child care advocacy organization since its founding in 1982, speaking on behalf of the hundreds of thousands of women, parents, educators, workers, academics and social policy experts from across the country who are committed to quality, affordable child care for all Canadians.-30-

The earlier version of the Canadian Child Care Advocacy Association of Canada is listed as being developed by Foil Media.

According to the membership page on the Time for Child Care (Child Care Now) website:

All memberships from Ontario and British Columbia are processed through their respective provincial child care coalitions as part of our Dual Membership Agreement.

Alight — hold on to that thought for a moment and let’s continue. There is another website that is called rethinkchildcare.ca. It is also a site that advocates for child care in Canada. The About Us page describes them as:

We represent more than three million working people across Canada. We know that too many families are struggling to find decent child care and are scrambling to piece together care they can afford. It doesn’t have to be this way. We want to put child care back on the agenda. This campaign is a result of the enthusiastic group effort of Canadian unions and childcare advocates.

Interesting. Okay — so I thought I would try and find out more about who is behind the rethinkchildcare.ca site. So I did some further digging. Sometimes it’s interesting to look at the Whois Lookup of a website. If the domain is not privately registered you can usually find out more information about it — including who actually registered it — which is essentially who owns or manages it.

At the time of this post, the Whois Lookup for this site shows the Registrant Name as Canadian Union of Public Employees.

The Canadian Union of Public Employees is also known as CUPE. So yes, rethinkchildcare.ca is registered to CUPE.

Still with me? Okay — let’s understand a bit more about CUPE and child care. According to the About Us page of CUPE:

The Canadian Union of Public Employees is Canada’s largest union, with over 680,000 members across the country. CUPE represents workers in health care, emergency services, education, early learning and child care, municipalities, social services, libraries, utilities, transportation, airlines and more. We have more than 70 offices across the country, in every province.

CUPE has been a leader in campaigns for child care, working in coalition with many groups, including Child Care Now.

And a further quote says:

CUPE has also been involved in anti-privatization campaigns, including campaigns focused on the large for-profit corporations that threaten the development of a strong public national child care program. In Ontario, CUPE has campaigned to protect municipal child care centres.

Provincially, CUPE has been active in wage campaigns in Nova Scotia, Ontario, Manitoba, Saskatchewan and BC. The not-for-profit child care sector is very fragile across most of Canada. CUPE has been involved in many campaigns to prevent the closure of centres at the local level.

CUPE will continue to work with our partners and our allies to advocate for a well-designed, publicly-funded universal child care program.

The lobby day was over a year in the making and was the largest the sector has seen in over a decade. Advocacy group Child Care Now organized the event with support from CUPE National. Activists met with over 60 MPs and senators, including members of every party and several cabinet ministers. Ministers heard first-hand accounts of the child care crisis in Canada from frontline workers and concerned families.

All of this didn’t really come as a surprise to me as I knew that a number of  unions have been providing endorsement, financial and in-kind support to campaigns related to child care for years.  For example, an archived blog post dated October 13, 2011 on the CUPE BC website stated that:

CUPE recently endorsed the “Community Plan for a Public System of Integrated Early Care and Learning”.

Okay — so — looping back — it’s now clear that rethinkchildcare.ca is registered to CUPE. Plus “CUPE has been a leader in campaigns for child care, working in coalition with many groups, including Child Care Now”, which includes the websites timeforchildcare.ca and childcareforall.ca.  And CUPE BC continues to be a supporter of the $10aDay plan.

Moving right along, I wanted to understand more about the websites timeforchildcare.ca and childcareforall.ca so I did a search of  the Whois Lookup records on May 8, 2019. This showed me that these two sites are registered to The Now Communication Group Inc (also known as The Now Group.) 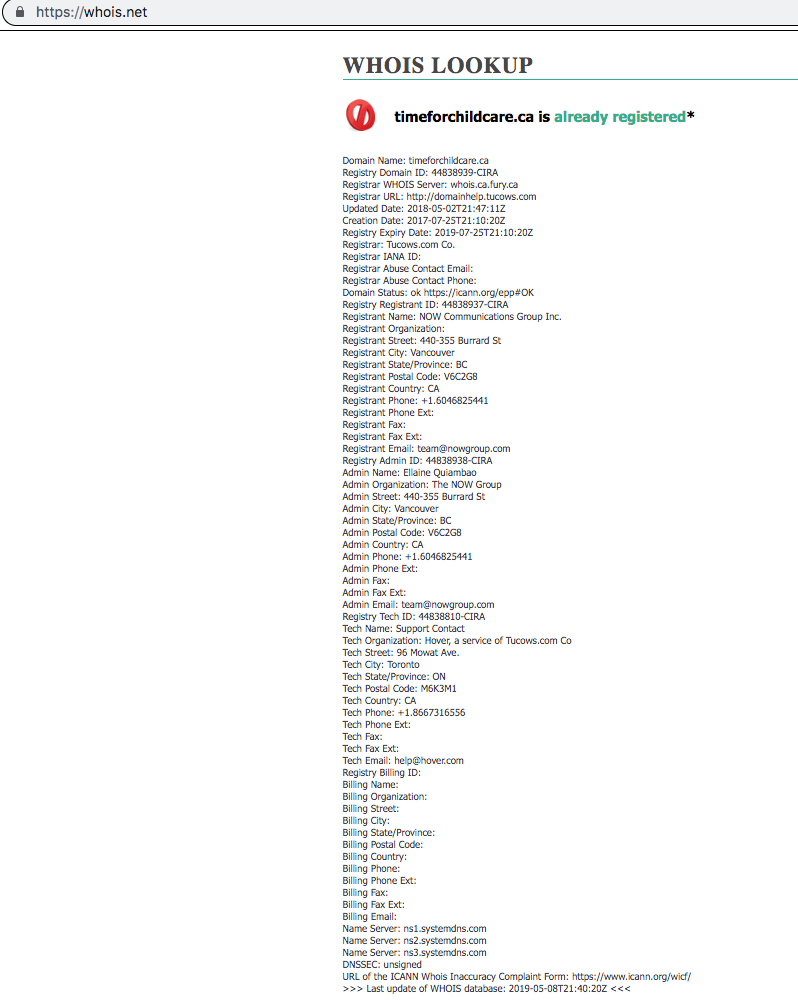 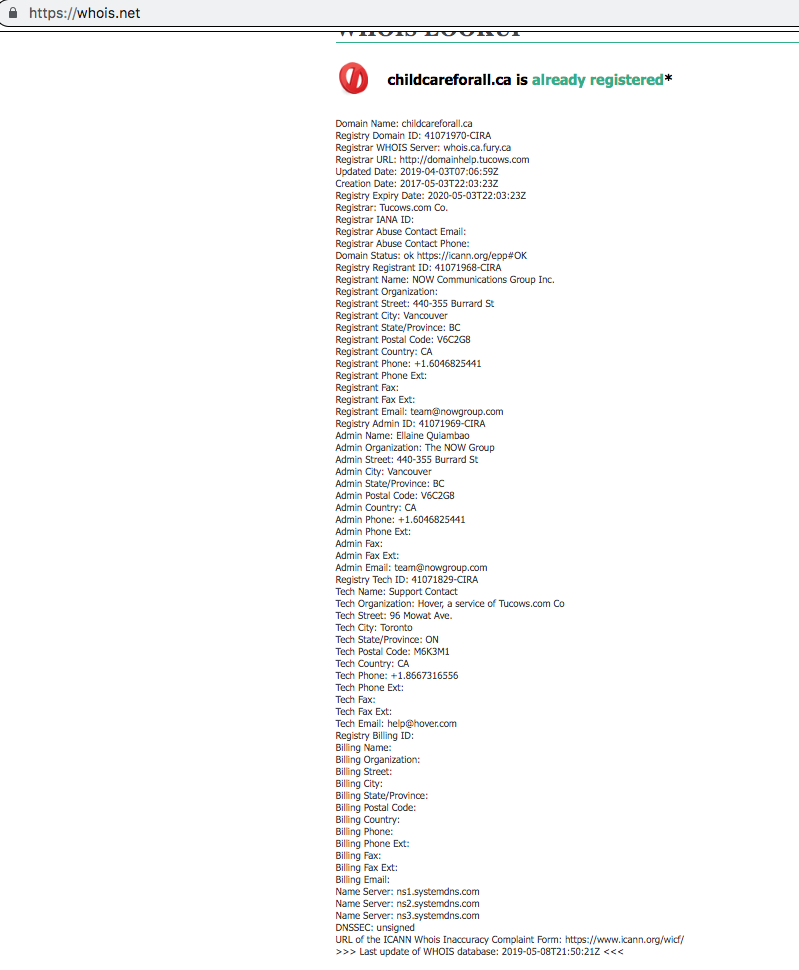 According to the About Us section of the NOW Group web the company is described as:

The NOW Group is Canada’s leading full-service advertising agency for progressive causes and social good. Launched in 1991, we have locations in Vancouver, Winnipeg, Toronto, and Ottawa.

Here’s a look at the team who work at The NOW Group.

So in understanding that timeforchildcare.ca and childcareforall.ca have a clear and direct tie to CUPE, I was quite interested in the fact that The NOW Group are listed as the registrant for each of the domains. A bit more research showed me a few interesting things about The NOW Group. For example:

In a 2013, The NOW Group wrote a blog post about working with CUPE to develop a video series for it’s 50th anniversary.

In a 2014, The NOW Group wrote a blog post about supporting the BC $10aDay Child Care plan.

Prior to joining The Now Group, Heather Fraser (the President and CEO) worked for CUPE as the Director of Communications (as listed on her Linkedin Profile)

A 2017, Vancouver Sun article included this:

Marie Della Mattia, special adviser to the leader: A key adviser to leader John Horgan on the campaign bus, Della Mattia has been working with Horgan for several months on his public speaking and delivery. She’s also assisted on policy and the party platform. Della Mattia is a veteran campaigner, having provided advice to seven winning NDP campaigns in four provinces. She also helped run NOW Communications for almost 14 years, the longtime PR firm that received millions in provincial contracts during the 1990s B.C. NDP government.

And there were these two posts on The Breaker:

There is further mention of work completed by The NOW Group in this post — Exclusive: Like the ’90s all over again, NDP is “padding the pockets” of Now Communications:

The Government Communications and Public Engagement department put Now and nine others on a preferred suppliers list, to avoid publicly tendering every contract worth $75,000 or more. The NDP-appointed bureaucrat who oversees the government’s advertising and marketing office is Robb Gibbs, the former Now creative director and husband of ex-Now CEO Marie Della Mattia.

Another thing I discovered is that the NOW Group are a certified Developer for NationBuilder. NationBuilder is an online platform that list their vision as:

We build the infrastructure for a world of creators by helping leaders develop and organize thriving communities.

I found that to be very interesting because the $10aDay website of the Coalition of Child Care Advocates of BC is built on NationBuilder, though the website indicates that the $10aDay site was designed by Van City Studios. Van City Studios are also a certified Developer for NationBuilder. They have solid experience running digital campaigns, as noted in this post about  Digital Fundraising for the Win. One quote that stood out to me was this:

MP Kennedy Stewart from Burnaby South was one of the few veteran NDP MPs to survive Trudeau’s “Red Tide”. Kennedy was also one of the few NDP candidates in Canada to use NationBuilder to run a digital, data-driven campaign, which he considers one of the key pillars of his success on election night. Our team at Van City Studios worked closely with Kennedy and his team to help them get up and running on NationBuilder.

Van City Studios have also developed another website on NationBuilder called GenerationSqueeze. The CUPE 4163 website has a PDF of the BC NDP’s post-secondary platform that quotes research from GenerationSqueeze.

Okay — so to recap, here’s what I have discovered so far —

The timeforchildcare.ca and childcareforall.ca. websites, are registered to The NOW Group. Heather Fraser, the President and CEO of The NOW Group, previously worked for CUPE as the Director of Communications. The NOW Group have worked with CUPE on various campaigns. And the NOW Group worked with the BC Government to launch the Budget 2018 website workingforyou.gov.bc.ca

It’s amazing what you can find out when you decide to do a little research.

Note: Every effort has been made to share the information that I discovered during this research accurately. Should you be aware of an error or omission please send an email to Jane@45Conversations.com